By Hrayr Harutyunyan and Hrant Khachatrian

Last year Hrayr used convolutional networks to identify spoken language from short audio recordings for a TopCoder contest and got 95% accuracy. After the end of the contest we decided to try recurrent neural networks and their combinations with CNNs on the same task. The best combination allowed to reach 99.24% and an ensemble of 33 models reached 99.67%. This work became Hrayr’s bachelor’s thesis.

As before, the inputs of the networks are spectrograms of speech recordings. It seems spectrograms are the standard way to represent audio for deep learning systems (see “Listen, Attend and Spell” and “Deep Speech 2: End-to-End Speech Recognition in English and Mandarin”).

The output layer of all networks is a fully connected softmax layer with 176 units.

Almost all networks easily reach 100% accuracy on the training set. In the following tables we describe all architectures we tried and report accuracy on the validation set.

The network consists of 6 blocks of 2D convolution, ReLU nonlinearity, 2D max pooling and batch normalization. We use 7x7 filters for the first convoluational layer, 5x5 for the second and 3x3 for the rest. Pooling size is always 3x3 with a stride 2.

Batch normalization significantly increases the training speed (this fact is reported in lots of recent papers). Finally we use only 1 fully connected layer between the last pooling layer and the softmax layer, and apply 50% dropout on that.

Here is the detailed description of the best network of this set: tc_net_mod.

During the training we accidentally discovered a bug in Theano, which was quickly fixed by Theano developers.

The spectrogram can be viewed as a sequence of column vectors that consist of 256 (or 128, if only <5.5KHz frequencies are used) numbers. We apply recurrent networks with 500 GRU cells in each layer on these sequences. 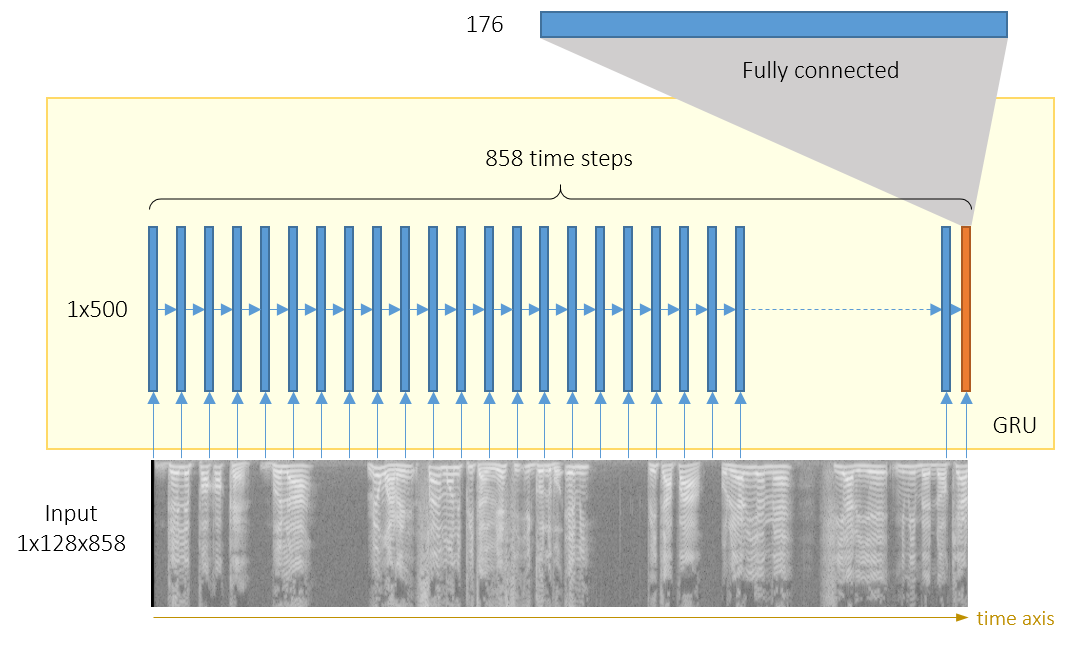 The second layer of GRU cells improved the performance. Cropping out frequencies above 5.5KHz helped fight overfitting. We didn’t use dropout for RNNs.

Both RNNs and CNNs were trained using adadelta for a few epochs, then by SGD with momentum (0.003 or 0.0003) until overfitting. If SGD with momentum is applied from the very beginning, the convergence is very slow. Adadelta converges faster but usually doesn’t reach high validation accuracy.

Combinations of CNN and RNN

The general architecture of these combinations is a convolutional feature extractor applied on the input, then some recurrent network on top of the CNN’s output, then an optional fully connected layer on RNN’s output and finally a softmax layer.

The output of the CNN is a set of several channels (also known as feature maps). We can have separate GRUs acting on each channel (with or without weight sharing) as described in this picture: 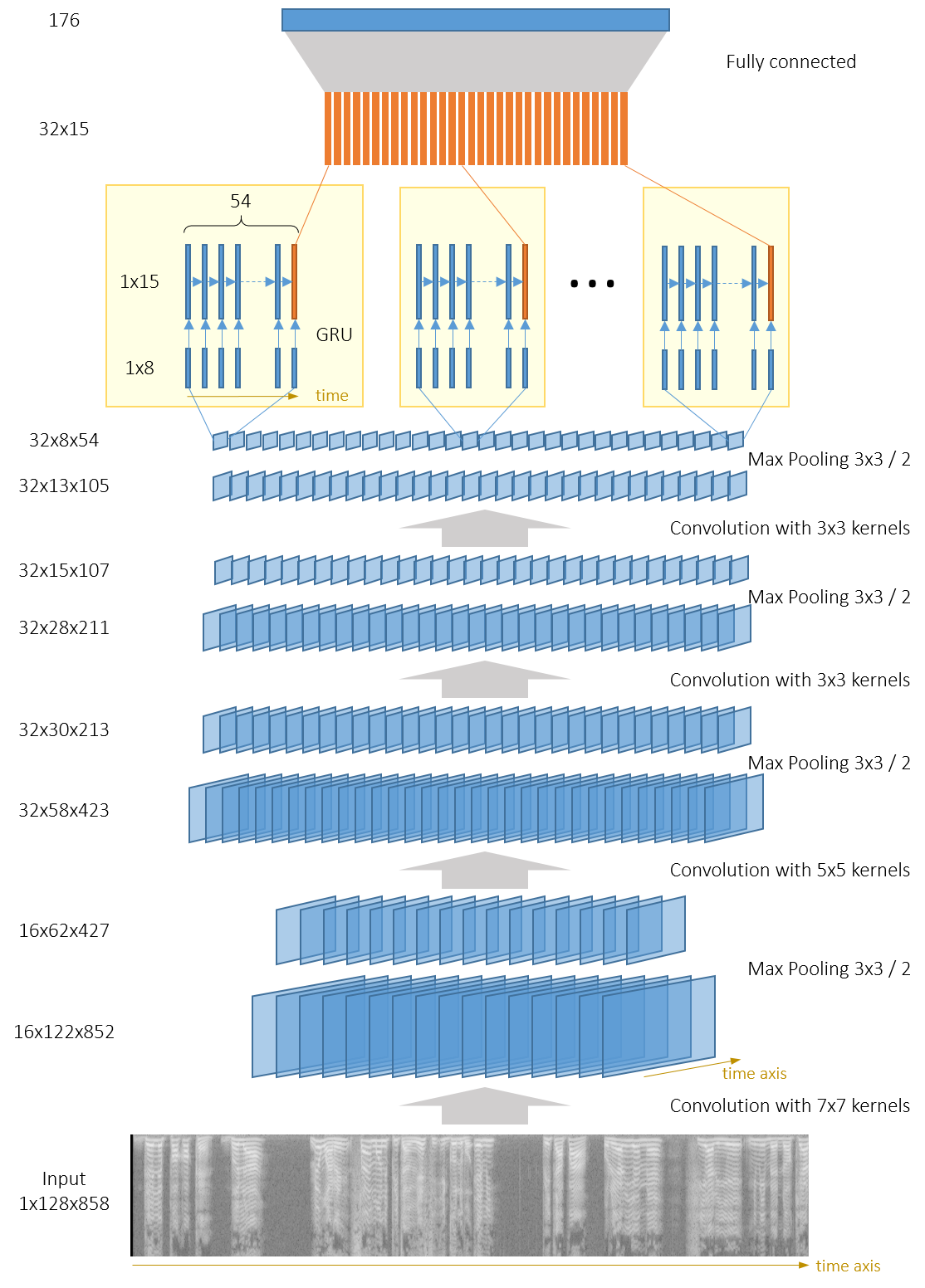 Another option is to interpret CNN’s output as a 3D-tensor and run a single GRU on 2D slices of that tensor: 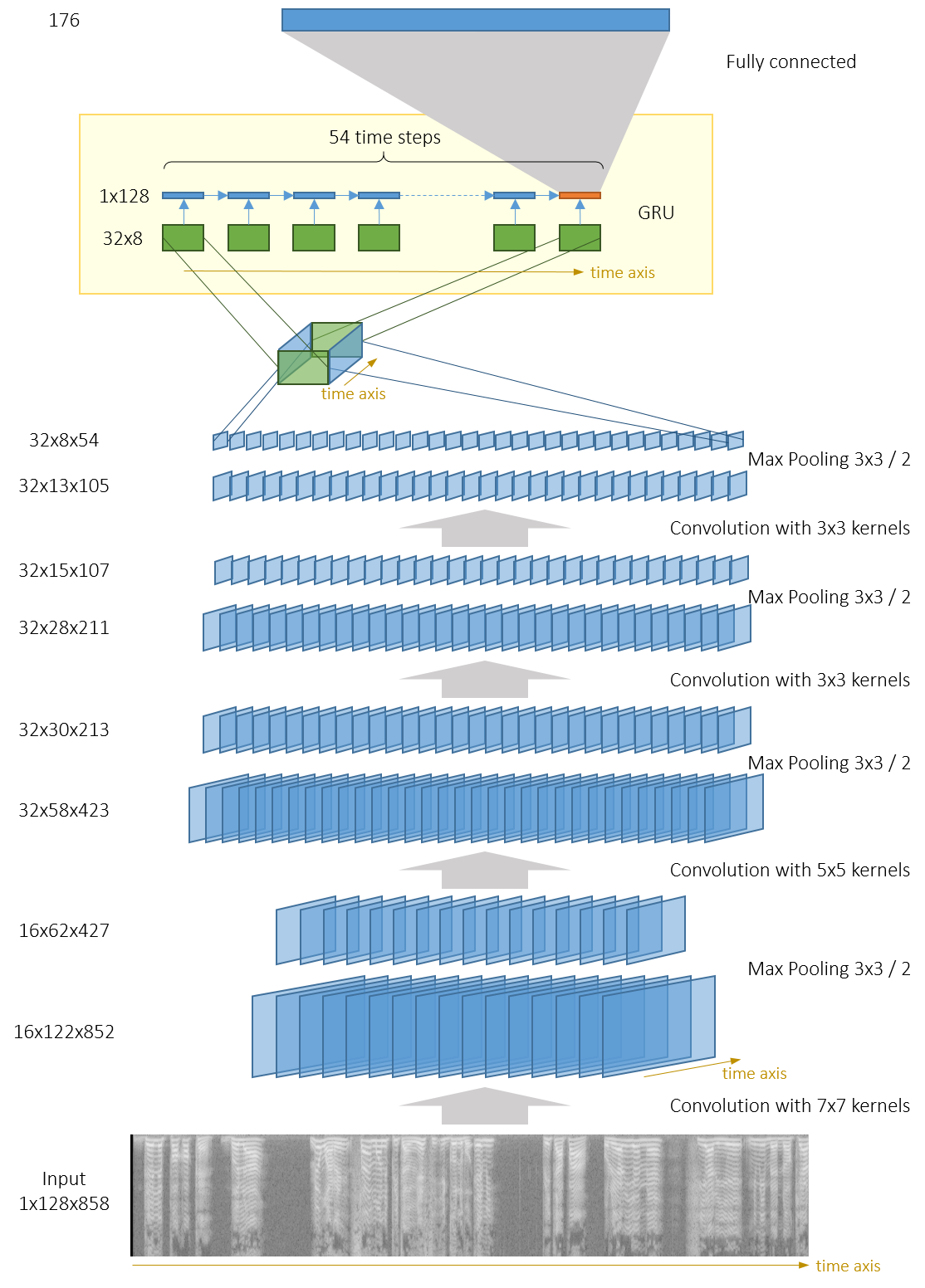 The latter option has more parameters, but the information from different channels is mixed inside the GRU, and it seems to improve performance. This architecture is similar to the one described in this paper on speech recognition, except that they also use some residual connections (“shortcuts”) from input to RNN and from CNN to fully connected layers. It is interesting to note that recently it was shown that similar architectures work well for text classification.

The second layer of GRU in this setup didn’t help due to the overfitting.

It seems that subsampling in the time dimension is not a good idea. The information that is lost during subsampling can be better used by the RNN. In the paper on text classification by Yijun Xiao and Kyunghyun Cho, the authors even suggest that maybe all pooling/subsampling layers can be replaced by recurrent layers. We didn’t experiment with this idea, but it looks very promising.

These networks were trained using SGD with momentum only. The learning rate was set to 0.003 for around 10 epochs, then it was manually decreased to 0.001 and then to 0.0003. On average, it took 35 epochs to train these networks.

The best single model had 99.24% accuracy on the validation set. We had 33 predictions by all these models (there were more than one predictions for some models, taken after different epochs) and we just summed up the predicted probabilities and got 99.67% accuracy. Surprisingly, our other attempts of ensembling (e.g. majority voting, ensemble only on some subset of all models) didn’t give better results.

The number of hyperparameters in these CNN+RNN mixtures is huge. Because of the limited hardware we covered only a very small fraction of possible configurations.

The organizers of the original contest did not publicly release the dataset. Nevertheless we release the full source code on GitHub. We couldn’t find many Theano/Lasagne implementations of CNN+RNN networks on GitHub, and we hope these scripts will partially fill that gap.

This work was part of Hrayr’s bachelor’s thesis, which is available on academia.edu (the text is in Armenian).